Back to all articles 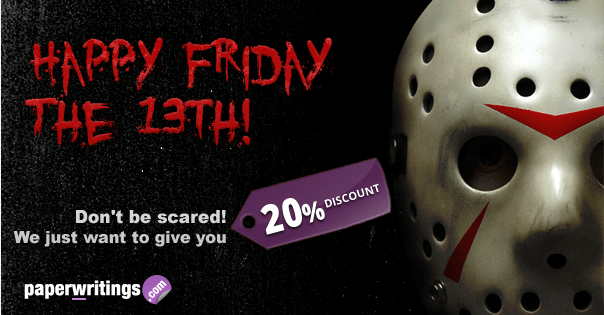 Get Scared And Get Productive On This Friday The 13th

That’s why we are going to be giving away 20% (!) discounts for a limited time of 13 minutes during Friday the 13th, at 1:13 PM. Read further for more info on the promotion!

If you survive this Friday, make sure you go onto PaperWritings.com at 1:13 PM US Central Time and copy your 20% discount from it. It is only going to be visible on the homepage and for a limited time of 13 minutes.

If you don’t make it, we give you a chance to like our Facebook page and share a post about the discount. You would have to do that until midnight, Friday, the 13th of September.

Friday the 13th is mostly a western thing, and most people celebrating it reside either in Western Europe or North America. Still, the eastern part of the world has adopted it to a great extent. Because the day is commercialized, it is now popular in China, India, Southeast Asia and even Africa.

It all started with a Hollywood movie “Friday the 13th” that this day became a yet another worldwide excuse to either celebrate or talk about mysticism. People love everything mystical, and Friday the 13th is similar to Halloween in that it attracts a lot of attention. Not as much of course, but still a fair amount.

Friday the 13 Around The World

The day became so popular in certain cultures that it started being brought to the ones, where it wouldn’t naturally have too big of an impact. For instance, Spanish-speaking countries often refer to the day as Tuesday the 13th, and even the horror movie that it all started with came to be known in Latin America as Tuesday the 13th.

Many cultures have traditionally thought of number “13” as unlucky. For instance, ancient Egyptians believed that afterlife was related to the 13th stage of life. After the Egyptian civilization went into decline, the number remained to be associated with fear and death.

There is also quite some Norse mythology surrounding the day. As the legend goes, there once were 12 gods at a banquet, when Loki, the uninvited god of mischief showed up, bringing the number of guests to 13. He became responsible for what was the death of one of the other gods – Balder. That’s how the number became associated with grief in Norwegian culture.

Some also say that the number came to be known as unlucky because of the Bible. The apostle to betray Jesus for instance, Judas Iscariot, was the 13th guest to be present at the Last Supper. That’s not all either, as according to the Bible, the confusion with languages, the day Adam was tempted with an apple, the day of the great flood, and the day Jesus died were all happening on the 13th.

Got stuck with another paper? We can help!
Get 5% off now and 10% back after your first order is ready.
I want a discount
15% OFF

In Norway, there is a word for fearing Friday the 13th. It is friggatriskaidekaphobia, while frigg is a Norse goddess that the word “Friday” is derived from. The other part of the word literally translates as “fear of the 13.” It is believed to be a legitimate phobia, and some people having it are even afraid to pronounce the words. Others avoid using aircraft or even going to work on this particular Friday.

Truly so, millions of people are afraid of Friday the 13th, as according to North Carolina Phobia Institute and Stress Management Center in Asheville. Symptoms range from mild anxiety to serious panic attacks in some individuals.

So you can better prepare and stock up on garlic, the days that are going to be Fridays the 13th are as follows:

13 TERRIBLE THINGS THAT HAPPENED ON FRIDAY THE 13th

Статья Get Scared And Get Productive On This Friday The 13th была изменена: March 18th, 2021 автором admin